Matthew Crane Selected To Perform At Voice In A Million Concert

Voice In A Million are pleased to announce that Matthew Crane, the U.K’s Youngest Classical Baritone at the age of 17, has been selected to perform, Live at the 02 Arena, London for the Voice In A Million concert on 28th January 2010.

This track, “You Raise Me Up” is performed by Matthew Crane, filmed at Shepperton Film Studios in October 09:

“…Quite extraordinary. I was not expecting that. You are a very talented young man…” – Simon Cowell

“I very much enjoyed listening to Matthew Crane. He has a remarkable voice for such a young man. Matthew has great talent and tremendous potential.
– Jools Holland

Having already surpassed the careers of many of his operatic counterparts of the older generation, Matthew has competed in many classical festivals and won many accolades for his stunning renditions of opera classics such as ‘Nessun Dorma’, ‘Toreador’ and ‘La Donna E Mobile’. He has performed on the world’s grandest stages including The Royal Albert Hall/The NEC and The Fairfield Halls with the London Mozart Players to great acclaim. 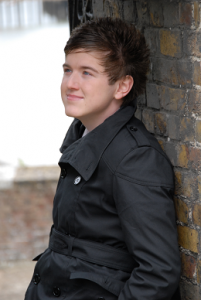 Matthew is very passionate about his singing and is involved in many charity concerts such as: BBC Children in Need, Mayors Charity Concerts and The Universal Peace Federation Concerts. He is a Patron of the CPC (Cerebral Palsy Care) charity and has sung at a private function for the CPC with The Drifters in May 2008.

His many achievements include being Champion of the BBC2 Talent Show ‘Let Me Entertain You’ hosted by Brian Conley, a support artist for Katherine Jenkins on several occasions and a regular face on terrestrial television. He was an X-Factor Boot Camp Finalist in August 2007 and a winner of ‘UK Unsigned’, the largest national talent show in the country which was held at The Hackney Empire in March 2008.

Matthew, who is currently sponsored by Gillingham Football Club, loves to sing and play the piano and looks forward to a long and prosperous career in the music industry and to gain entry to The Royal Academy of Music in London.

His aspirations are to be the best classical singer in the world and to perform at the 2012 Olympic Games and to date still continues to wow the crowds with his unique vocal talents.

Matthew is currently working on and recording some original material with two renowned songwriters. Watch this space!