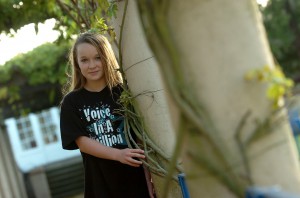 Voice In A Million are delighted to report that Surrey-based Sophie Plummer won the Richmond Upon Thames Performing Arts Festival – Song From The Shows Competition (Category Age 10 to 12) on Saturday 26th February 2010, only weeks following her performance of Pie Jesu and several other tracks from the Voice In A Million songbook at the London 02 Arena concert, raising awareness for the British Association For Adoption & Fostering.

Sophie, who attends the Notre Dame School in Cobham, Surrey gained a Distinction for her performance of ‘Think Of Me’ from Phantom of the Opera at the festival’s competition last weekend.

Founded in 1929, Richmond Festival is one of the largest competitive festivals in the South of England with nearly 2000 entries in 2009 and with many more people of all ages taking part, in groups and choirs and their enthusiastic supporters. It has some of the highest standards of amateur performance in the country with many of the young dancers, actors and musicians become professionals in their chosen field.