Chapter One- Through the Orphanage Door 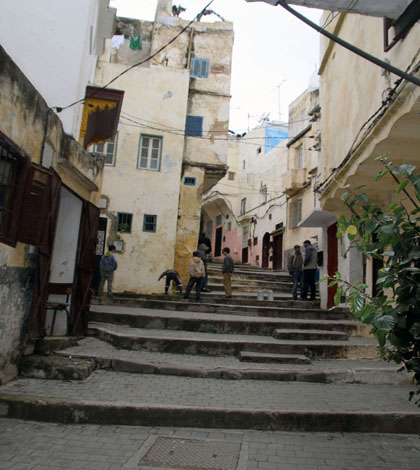 A journey always seems longer when you are unfamiliar with your destination. It was February 23rd, 2006, Friday morning, around 10am, a date and time that will be forever imprinted in my mind. My husband Robert and I were climbing a rocky hillside road in Tangier. The sky was dark grey and it was raining heavily, the sort of rain that drenches you in seconds. Even though it was winter, it wasn’t the kind of weather I imagined for a place like Morocco.

We hardly spoke as we trudged on. There was so much to absorb in the foreign landscape, and so many thoughts in our heads, there was no room for conversation. Robert’s brother Peter walked on ahead, leading the way. Peter, a Christian missionary, had been resident in Morocco for some time, working in a Christian children’s village in the north of the country. He’d been to the orphanage, Le Creche De Tangier, before. It was Peter who suggested we make the journey to Tangier to explore the possibilities of adopting from the orphanage.

The steep incline we were hiking that morning was almost deserted, certainly no holidaymakers in sight. The persistent rain flattened any noise and an eerie quietness hung in the air.

A group of men suddenly appeared striding towards us in the gloom, dressed in typical Moroccan clothes. They seemed to glide like ghosts; all in the same muted, dull coloured floor skimming robes with pointed witch-like hoods and faces mysteriously hidden from view. For a shocking second, their outfits made me think of the Ku Klux Klan and the atmosphere suddenly felt oppressive. My own fitted yellow and black western tracksuit seemed completely out of place and I was struck by the fact there were hardly any women about. I clutched Robert’s hand tightly as my mind raced ahead with anticipation.

On either side of the rubble-strewn road, I noticed the backs of houses, with what looked like garages or sheds at the bases.  The wooden doors to these sheds were flung wide open and inside, shadowy and dim, I spotted men, heads bowed, working diligently on sewing machines.  Most of these buildings were being used as shops, over-spilling with fruit, vegetables, toilet rolls, detergent, and tobacco – all manner of mundane household goods.  Pairs of shoes for sale hung on wire strands like pieces of meat. Boys, no more than eight years old, wandered the slope barefoot trying their hardest to sell little packets of man-size tissues and the odd pack of chewing gum.

As we approached the top of the hill, I saw half a dozen elderly women, sitting crossed legged on the stony pavement on the right hand side, their skirts draped like tents. Shawls covered their frail shoulders and they wore scarves on their heads. They seemed to sit with all the patience in the world, waiting, statue-still, offering their scant wares.  One woman had five withered carrots at her feet lined up on an old Hessian potato sack, another, just a sprig of parsley.  What would she get for five carrots, I immediately thought. She clutched money in one hand and rubbed her stick-like fingers together; her eyes black and vacant in her weathered, leathery face. The old women didn’t seem to notice the rain. I wondered why they weren’t trading down in the hub of the city at the bottom of the hill.  Here, it was certainly calm in comparison to the action taking place down in the streets below and it seemed to partition one section of Tangier from the other. If they travelled down, they probably wouldn’t ever get back up again I decided.

I could sense Robert was taken aback by our alien surroundings, but for me, it actually wasn’t quite so out of the ordinary. I’d spent part of my childhood living in Saudi Arabia, when my father was stationed there with his work. He’d spent eighteen years working in the Middle East.  Yet when I knew I was coming to Morocco, I didn’t think for one minute that this North African country would be anything like Saudi Arabia.  But seeing it now, for the first time, I realised how much the people and the countryside was similar.

So many thoughts of my dad, who had died almost two years previously, sifted through my mind as we trudged slowly up and up. I felt a strange connection.

‘This is meant to be,’ I whispered to Robert. ‘Because of dad.’ He sort of smiled, without saying anything back.

Peter hesitated for a moment when the hill finally reached its summit and our path forked to the left and right.  Sensing we must be close to our final destination, my stomach churned. Nothing I had felt when I was on the stage in the west end waiting in the wings for my first entrance felt as nerve wracking as this. I really thought I was going to throw up. It didn’t help matters that I hadn’t managed to eat breakfast.

Less than an hour earlier, I’d watched with mounting impatience as Robert ordered two poached eggs back at our hotel.  Why did he choose poached eggs, I said to myself. The chef needs to cook them and that will take ages.

‘You should have some breakfast,’ Robert suggested.  ‘It might be a long day.’

Peter had joined us for breakfast before taking us to the orphanage. I knew he and Robert wanted to catch up, because they hadn’t seen each other for a while.  I tried to be patient and engage in their conversation but all I wanted to do was get on with the day. I sat mutely, drinking coffee, as they chatted. I know it sounds selfish, but I didn’t really want to listen.  I didn’t want breakfast either.  I put some toast in my mouth. I chewed, but I couldn’t swallow.  ‘Have you finished your coffee Robert? I asked when he was in the middle of a conversation.

I felt shattered at breakfast. I hadn’t been able to sleep the night before at all. Robert and I had chatted until about 2am when he drifted off into a deep sleep, but I was so restless. When I’d climbed into bed hours earlier I thought I’d be out like a light because of all the travelling. But I kept glancing at the digital clock, as the hours crawled through the long, quiet night and through the corridors of my wired brain. I couldn’t even close my eyes. I was up and down like a yo-yo, tiptoeing backwards and forwards to the bathroom, trying not to wake Robert. I spent most of the night pacing the room and standing out on the tiny balcony, in the freezing cold, staring at the stars. The sweeping view of Morocco from the window was quite magical, dotted with lights and palm trees among the tightly packed in whitewashed hotels, villas and flats. The buildings all seemed to glow a pale blue colour in the inky coloured sky and despite the chill, it was a scene that reminded me of holidays past, welcoming and beckoning and so far from home. But this strange night, holidays were the farthest thing from my fidgety mind.

To try and pass the time I sat down at a desk in the corner of our hotel room and started to write a diary. I’d never kept one before, but now it just seemed like the right time to start. I switched on the little desk light and reached for my notebooks from my bag. I was full of emotions – getting them all down on paper could only be a good thing. I knew in my heart this was the beginning of our journey and that the end result would hopefully be our baby and I wanted desperately to be able to recall in future years to our son or daughter, everything that had happened. I needed to know I could provide them with all the details I could about their passage into the world that they would ultimately want to know. I felt like I was doing the right thing, going to the orphanage, but I was still terrified of what I was going to see and how I would feel.

I’d never been to one before, let alone a foreign one and I just didn’t know what to expect.  The pictures I had in my mind were of the pictures I’d seen of those huge, horrible rooms in China with rows of anonymous babies and graphic images of dark-eyed Romanian infants strapped to the rusty bars of their cots in filthy rooms.

Anxious thoughts whirred round and round my head. How do you choose a baby? It’s not like going shopping for a new pair of trousers. I didn’t know how I’d feel. What if we didn’t bond with each other?  Would I be able to find a baby girl and just love her? What if none of them liked me?

Where the road split, Peter steered us to the left. A few hundred yards later, we reached a large, half-open wrought iron gate with railings. Directly ahead of us, on the other side of the gate, stood the Hospital Kortobi. A guard stepped out his tiny brick lookout hut, dressed in a neat police uniform. My palms felt clammy inside Roberts. But we didn’t let go of each other. 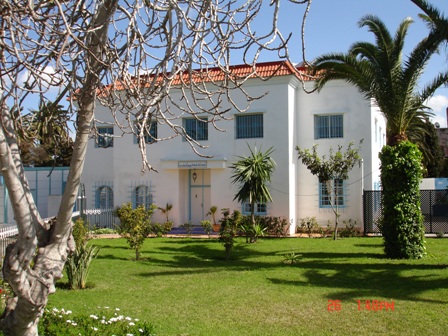 ‘We’re here to visit the crèche,’ Peter told the guard. He nodded and beckoned us in. The building was square and imposing. There was no immediate indication of what it was – it could have been any building, anywhere in the country. At first glance, it looked almost colonial, like someone’s freshly whitewashed villa, with its shiny terracotta-tiled pathway, lined with clusters of red geraniums gently rocking in the breeze. I noticed light blue grilles on the windows.

Peter rang the doorbell. I stood behind Robert, still holding his hand. I could feel myself shaking. I couldn’t go in front. A few seconds later, the door opened gradually and a tall lady around thirty years old, dressed in a white, knee length buttoned up medical coat emerged. Her hair was the colour of chestnuts and was tucked tidily under a white headscarf. Her skin was light olive with no trace of make-up.

Peter greeted her warmly and she kissed him on both cheeks and smiling she acknowledged us each in turn.  She spoke no English, but her warm smile was enough for us to know we were welcome. The hallway was a large empty oblong central room, leading off from it were doors to other rooms and there was a wide staircase.  It was filled with daylight, even on this dismal February day. Every wall was half covered with ceramic tiles, decorated with ornate, swirling patterns of reds, yellows and blues. The floors were tiled. There were no carpets.  But it wasn’t the building that struck me most.

Voice in a Million Ltd will use the information you provide on this form to be in touch with you and to provide updates and marketing. Please let us know all the ways you would like to hear from us:

You can change your mind at any time by clicking the unsubscribe link in the footer of any email you receive from us, or by contacting us at team@voiceinamillion.com. We will treat your information with respect. For more information about our privacy practices please visit our website. By clicking below, you agree that we may process your information in accordance with these terms.

We use Mailchimp as our marketing platform. By clicking below to subscribe, you acknowledge that your information will be transferred to Mailchimp for processing. Learn more about Mailchimp's privacy practices here.